The Scoop: More than 50 million Americans suffer from autoimmune diseases, which cause cells in the body to attack themselves. Despite that significant number, a lack of information about these conditions persists. The American Autoimmune Related Diseases Association (AARDA) wants to change that dynamic through its advocacy, fundraising, and research initiatives. The association offers many ways for philanthropic individuals, couples, and families to get involved, from hosting fundraisers to participating in Autoimmune Walks to raise money and awareness. For teaching people about autoimmune diseases and making a positive impact through research, AARDA has earned our Editor’s Choice Award.

This article was originally on DatingNews.com | By: Hayley Matthews | Posted: June 1, 2020 | Source

Several times a year, people gather in parks, ballrooms, conference centers, and other venues around the United States to spread awareness about autoimmune diseases. Some walk to support family members or friends who struggle with conditions, while others want to teach their communities about juvenile arthritis or Crohn’s disease — just two of more than 100 autoimmune diseases.

Some people bring friends or colleagues to Autoimmune Walks, and others participate with a spouse or partner.

The American Autoimmune Related Diseases Association (AARDA) organizes the events and invites anyone interested in spreading awareness and fostering research to join. People who are committed to the cause can even host a walk or fundraiser of their own.

“We host six to eight walks each year for autoimmune patients and the public. Dozens of other individuals, couples, and teams lead virtual walks or host their own grassroots fundraising events to raise awareness and support,” said AARDA President and CEO Randall Rutta. “It’s a wonderful way for people to learn more, to experience the community and camaraderie that’s generated, and to support family members and friends living with autoimmune diseases.”

The association is always looking for more individuals, couples, and families to get involved with its mission in both small and large capacities. For instance, they could share brochures at a local gathering or support the nonprofit with a financial gift.

“And when people invest with us, we report to them about the impact of their philanthropy,” Randall said.

While large-scale walks and smaller grassroots events are on hold during the COVID-19 pandemic, AARDA is making big plans for when the country gets back to normal. Eventually, supporters will be back in force at walks, as well as participating in other gatherings that bring people together, such as auctions, raffles, and golf outings.

“And people can really feel like they’re part of the solution to this problem,” said Randall.

A History and Mission Rooted in Autoimmune Diseases

Some of the most widely known autoimmune diseases include Lupus, celiac disease, and Type 1 diabetes.

“There are many conditions where the body is attacking its own tissue. The underlying cause is a problem with the tissue in the body. For someone with arthritis, it might be in their joints. Lupus affects multiple systems, but particularly kidney function,” Randall said.

She also wanted to raise awareness about the likelihood that if someone has one autoimmune disease, they may develop more. Furthermore, autoimmune diseases typically affect women more than men — 75% of all those affected are women, and, ADs cluster in families.

The purpose of AARDA, then, is three-fold: raising awareness, expanding education, and facilitating research. AARDA helps people find information and a specialist if they think they have an autoimmune disease. Then, it aims to foster more autoimmune disease research.

Much of AARDA’s well-respected status in the nonprofit and health advocacy world has come from Virginia, a passionate supporter of the cause.

“She’s personally committed, and that commitment has permeated our staff,” said Randall.

Couples Can Get Involved By Volunteering, Attending an Event, or Hosting a Fundraiser

Couples have plenty of ways to get involved with AARDA’s mission. Many supporters get started by participating in a local Autoimmune Walk.

And if they want to start raising funds for the organization or get information out to their communities, they could host a member of AARDA’s speakers bureau in a live or virtual event.

“We have a scientific advisory board made up of pioneers in this field. It’s personal, so that means people are passionate. Experts are often available to tell their stories or share their professional contributions,” said Randall.

When people contact the organization, its staff will help them design an event that might fit their community or goals. 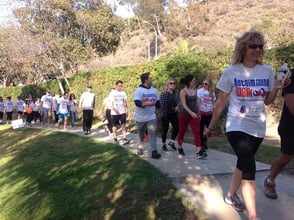 Couples can get involved in an Autoimmune Walk or even host an event.

“We ask that couples tell us about their circle of influence, and we can help them design an event for them,” Randall said. “And if it is a big event, we try to have a representative from the organization there in person.”

If someone has a passion for politics, AARDA might offer ways to connect with their elected officials and advocate for issues that matter to the autoimmune community. And Advocacy is a helpful way for couples to get involved.

Randall said AARDA is grateful for the support it receives. The organization has seen so much success because of its range of small-scale and large-scale donors, advocates, and volunteers.

“It means the world to hear from people with autoimmune diseases that the work we’re doing is meaningful to them,” Randall said.

AARDA is now focusing its mission on supporting a particular group of people: those with autoimmune diseases who fear they have contracted or will contract COVID-19. Anyone with an underlying condition, especially those who take immunosuppressive medication or corticosteroids, is more likely to have complications if they contract the virus.

That’s why the association is spreading awareness about COVID-19’s possible impact on the community.

“We sponsored a briefing with the CDC about COVID-19 for people with autoimmune disease. No one had heard of those things being linked directly. We had an hour-long presentation with more than 2,000 participants,” Randall said.

Even if an area isn’t allowing for gatherings or big events, couples can still raise awareness and funds for AARDA virtually. For instance, they could host a fundraiser on a virtual platform and invite one of AARDA’s affiliated scientists or team members to share their experiences.

“We’re always looking to take advantage of virtual platforms and for sponsors or supporters in that kind of environment. We could talk about an issue that could have an impact,” Randall said.

Someone may start out as a supporter of AARDA and end up needing its resources for themselves or their partner at some point.

“Fifty million Americans have at least one autoimmune disease, so it may affect you or your family or your neighbors during your life,” Randall said.

ABOUT THE AUTHOR: Hayley Matthews

Hayley is the Editor-in-Chief of DatingNews, and she handles editorial schedules, interviews, social media, and partnerships, among other things. She’s been in the dating industry for more than six years, and her work has appeared in numerous publications, including Bustle, Cosmo, the Huffington Post, AskMen, and Entrepreneur. AARDA Mourns the Loss of Dr. Noel Rose, “The Father of Autoimmunity”